The animal kingdom comprises of countless organisms. Similarly, there are many animals which resemble each other in some ways. Thus, it leads to a lot of confusion between different species. If we casually observe them, a leopard and cheetah might appear to be close cousins or at least the same species of cat. As they have the same body layout and also similar markings on their body, the differences between them become inconspicuous. Nonetheless, there is a lot of difference between leopard and cheetah in a lot of aspects. For instance, their habitat, hunting style, vocalization, diet and more are quite distinct.

Leopards are largely solitary cats having a fawn or brown coat with black spots. They are found mostly in woodlands and grasslands in areas of Africa to South-Eastern China. However, they can also thrive in Marginal Mountain and desert habitats. They are carnivorous animals which like to prey upon grazing animals like gazelles and tufted deer. Although, you will learn that they can eat anything from dung beetles to amphibians. Moreover, they are known to silently stalk and pounce on their prey. Similar to Cheetahs, they strangle their prey with a bite to their beck. Most importantly, leopards are nocturnal hunters.

Cheetahs are large slender spotted cats. They mostly inhabit the level plains of Africa and Southwestern Asia. Historically, they were also found in India, however, they have not been sighted there in recent times. They are carnivorous animals that prefer grazing animals which weigh approximately 30-40 pounds like gazelles and impalas. In addition, they also prey on hares and birds as well. Further, cheetahs are built for speed. After that, you will learn how they hunt during the day and use their sense of sight for tracking their prey. They can chase at speeds exceeding 60mph for short bursts. Sometimes, they live alone but more than often, they hunt in groups of two or three.

Difference between Leopard and Cheetah 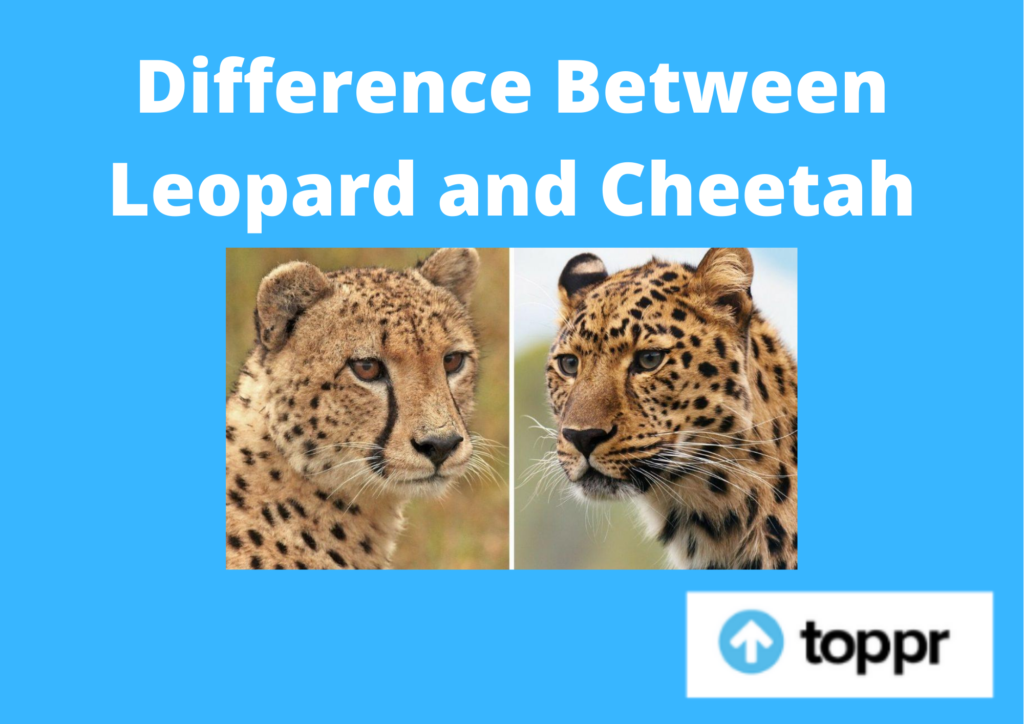 Important Difference between Leopard and Cheetah

Leopards have a bulkier body which is in a more traditional cat shape. Moreover, you will notice their legs being proportionally short and paws being wide. This helps them in climbing trees.

Moreover, the white half-moons under their eyes help in night vision. Further, leopards make a sound which we classify as a roar or a growl. It resembles that of a lion but not that loud.

Cheetahs are not shaped commonly, as in, different from other big cats of their own genus. Moreover, their bodies are more rangy greyhound-like. The black tear lines that extend from their eyes to their mouth’s corners helps in seeing long distances.

Most importantly, they are the only big cats who are not able to roar. Instead of that, they produce a variety of sounds like growling, purring and chirping. They have smaller heads in proportion to their bodies for streamlining during running.

FAQs about Leopard and Cheetah

Question 1: What are the characteristics traits of leopards?

Answer 1: Leopards are solitary carts and mostly nocturnal. They are quite agile and powerful swimmers. They mostly hunt between sunset and sunshine.

Question 2: State one difference between leopard and cheetah.