Did you know that millions of nephrons are involved in the process of urine formation? That is right, what seems like a straight-forward function is actually a complicated life process of our body. Let us educate ourselves about urine formation and its functions.

Urine is the liquid waste product of the human body. It contains urea, uric acid, salts, water and other waste products that are the result of various metabolic processes occurring in the body. It is formed in the primary excretory organs– the kidneys. The structural and functional unit of the kidneys is called the nephrons. Millions of nephrons are involved in the process of urine formation.

The formation process occurs in 3 steps or phases:

Anatomy of the Nephron 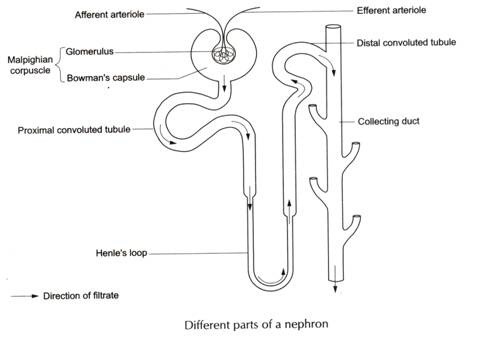 The anatomy of the nephron is important to understand the urine formation process. Each nephron is made up of two parts: 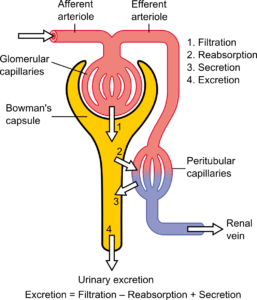 This process occurs in the glomerular capillaries. The process of filtration leads to the formation of an ultrafiltrate. The blood gushes into these capillaries with high pressure and gets filtered across the thin capillary walls. Everything except the blood cells and proteins are pushed into the capsular space of the Bowman’s capsule to form the ultrafiltrate. The glomerular filtration rate (GFR) is 125ml/min or 180 Litres/day.

During glomerular filtration, all substances except blood cells and proteins are pushed through the capillaries at high pressure. At the level of the Proximal Convoluted Tubule(PCT), some of the substances from the filtrate are reabsorbed. These include sodium chloride, potassium, glucose, amino acids, bicarbonate, and 75% of water.

Absorption of some substances is passive, some substances are actively transported while others are co-transported. The absorption depends upon the permeability of different parts of the nephron. The distal convoluted tubule shows selective absorption. The substances and water which is reabsorbed are taken up by the peritubular capillaries to be returned to the blood.

The peritubular capillaries that help in transporting the reabsorbed substances into the bloodstream, also help in actively secreting substances like H+ ions, K+ ions. Whenever excess K+ is secreted into the filtrate, Na+ ions are actively reabsorbed to maintain the Na-K balance. Some drugs are not filtered in the glomerulus and so are actively secreted into the filtrate during the tubular secretion phase.

Physical characteristics: Urine is the waste product that is eliminated by the kidneys. Urine contains waste products like urea, salts, excess ions, water, and metabolized products of drugs.

Urine is often light or pale yellow in colour and fresh urine has a slight ammoniacal smell. It is often clear in turbidity with a pH of around 4-8. These characteristics vary depending upon the nature of the disease in the body. Often a urine sample analysis helps to detect diseases like diabetes, kidney failures etc.

Chemical composition: Chemically, urine is composed mainly of urea, sodium chloride, potassium ions, creatinine, ammonia products, and some amount of protein, and other metabolites. Certain abnormalities in the urine composition occur in the following:

Q: Which of the following is the Glomerular Filtration Rate of a nephron?