What is the Definition of Stratus Clouds?

The term status refers to a sheet or a layer. This is a term used to denote a class of clouds that are flat and featureless capable of producing slight drizzles. It forms a continuous grey layer covering the sky. It can make the day feel dull and grey. The clouds when coming very close to the ground takes the form of a fog. They are found at a lower height as compared to altostratus, below 6000 feet.

There may be many different shapes of clouds. However, they possess a restricted number of forms. This difference in shapes is the result of consistent rising and falling of the clouds. They change forms within minutes throughout the atmosphere. The formation of clouds is a result of the condensation process. The change of liquid to gas is known as evaporation.

Read about Layers of Atmosphere for better understanding of Stratus Clouds

However, the vice-versa i.e. the change in state from gas to liquid is known as condensation. On attaining saturation level i.e. a state where the atmosphere cannot hold the water anymore is where the condensation takes place. The water vapor condenses in a liquid or solid form. Thus, liquid and solid forms are water or ice-crystals respectively. Let us have a look at facts and types of stratus clouds. 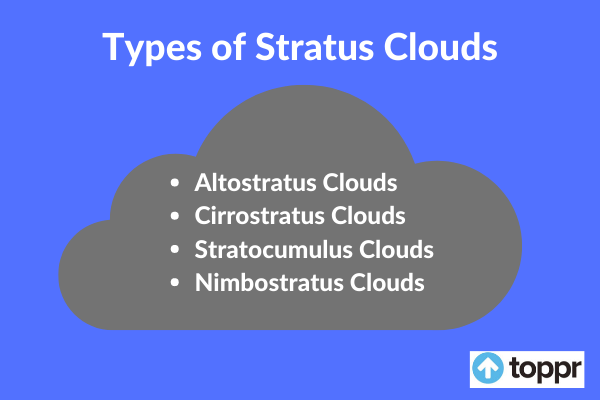 It is a cloud with a horizontally layered appearance. Furthermore, the rising air in the lower heights of the Earth’s atmosphere leads to the formation of such types of clouds. There are also many subforms of stratus clouds. These include:

Stratocumulus clouds: These are clouds resembling a much of cumulus clouds. However, the exception is that it is largely dark, and also the clouds are grouped together i.e. in larger masses. The chances of precipitation are almost nil. However, there may be slight rain sometimes. These types of clouds are a sign of coming of storms, characterized by gusty winds and dull weather. Moreover, they are viewed underneath the cirrostratus and altostratus.

Stratus clouds thus form a blanket that tends to cover the entire sky. These are in combination with other types. Also, there are many species of such types of clouds. The subforms of stratus clouds provide knowledge of the effects of the same on the weather, thus helping to forecast the situation.

Q. Formation of stratus clouds near the ground is known as:

Ans: The correct answer is 2.

The stratus clouds, when formed near the ground, is known as fog. The falling ambient temperature of the air or the added moisture in the air causes fog.