Let’s break down the Prepositions of Time

That’s actually a very good table for you to print and stick somewhere in the house if you are trying to learn Prepositions. Try coming up with new sentences using each of these Prepositions of Time and you are sure to understand their usage. Maybe try having a conversation with your friend or bench partner using all the above prepositions. Let’s see some more easy examples here, maybe you can try and justify why a preposition was used instead of another one in a sentence: 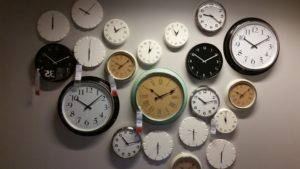 Try some more examples on your own. It’s super fun! That wraps our chapter on Prepositions of Time. Keep watching this space to find out more Kinds of Prepositions.

Q: Fill in the blank with a suitable preposition.
The sports club meeting is _______ Friday.