Before, we look at the concept of development, let’s take a peek at our Economy’s key strengths and performance in recent years.

Key Strengths of the Indian Economy

As a country, India has some strong macro-fundamentals and performance. During the years 2005/06 to 2011/12, the key strengths of the Indian Economy were:

These strengths have therefore led to significant growth in our country’s macroeconomic parameters as shown below:

While the figures certainly look promising, India still has a lot of ground to cover. The per-capita income (PCI) of an Indian is still considerably lower than most of the other countries in the world like the UK, USA, Japan, etc.

Learn more about the methods of measuring the National Income here in detail.

Meaning of an Underdeveloped Economy

India is still battling a lot of problems like illiteracy, poverty, child mortality, etc. As a nation, we have to defeat these enemies before the world starts looking at us as an emerging economy. In order to comprehend the meaning of an underdeveloped economy, let’s first look at the concept of development.

What is the concept of Development?

Similarly, growth and development are also separate aspects. Growth, in simple terms, means quantitative improvement. On the other hand, development considers growth as well as various aspects of human development.

Therefore, we can classify all the countries around the world into two broad categories – Developed and Developing countries. A developing country means that even though the country is underdeveloped, it has initiated the process of development. Take a look at the following diagram: 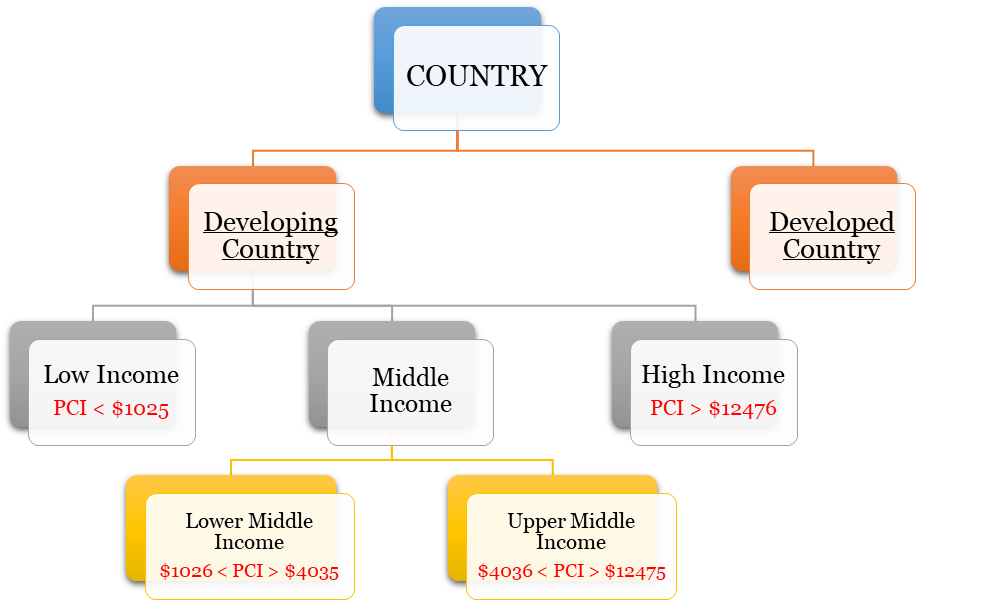 In the current scenario, two Asian economies – India and China are developing faster than the other High-Income countries. In fact, as of 2011, China has already entered the Upper-Middle-Income group with a PCI (per capita income) of $4940. India, with a PCI of $1410 in 2011/12 has a long way to go.

Q1. How are developing countries sub-divided based on their income?

If the per capita income of a developing country is: