The term lithosphere has been derived from the Greek language. Lithos means rocky whereas sphaira for sphere means rigid. It is basically the outermost shell of a terrestrial-type planet or natural satellite. On earth, the lithosphere composes of the crust and portion of the upper mantle which behaves elastically on time scales of thousands of years or greater. Through this article, we will study the layer in detail so that you get a better understanding. 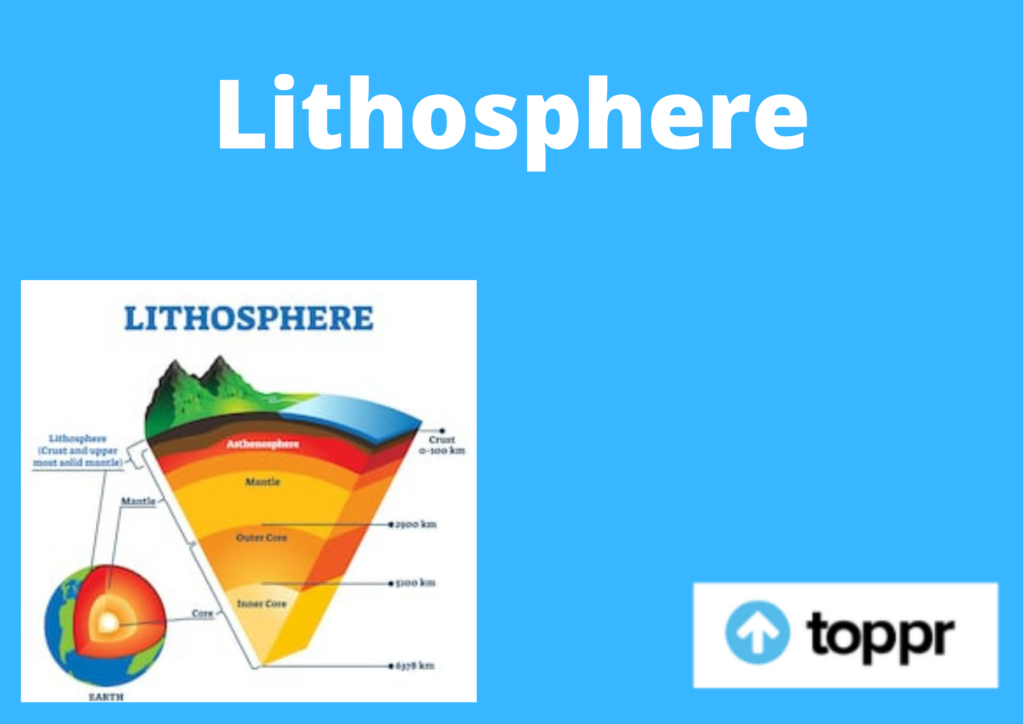 Lithosphere refers to the rigid and outermost shell on Earth. The composition of it is the crust and the portion of the upper mantle. We can distinguish the crust and upper and mantle on the basis of chemistry and mineralogy.

In other words, it includes the crust and the uppermost mantle that constitutes the hard and rigid outer layer of our planet Earth. The uppermost part of the lithosphere which chemically reacts to the atmosphere, hydrosphere, and biosphere through the soil-forming process is known as the pedosphere.

In 1911, A.E.H. Love described the concept of this layer as the strong outer layer of the earth in his monograph. The monograph was known as “Some problems of Geodynamics”.

It was then further developed by Joseph Barrell who wrote a series of paper about this concept and also gave us the term lithosphere. He based this concept on the presence of major gravity anomalies over continental crust.

From this, he inferred that there must be an existence of a strong, solid upper layer above a weaker layer which can flow. Further, Reginald Aldworth Daly further expanded these ideas in 1940 in his seminal work “Strength and Structure of the Earth.”

Thus, geologists and geophysicists broadly accepted these concepts. Thus, you see that this concept of a strong lithosphere resting on a weak asthenosphere is significant to the theory of plate tectonics.

First, you need to know that the crust of the earth is not a homogenous substance. In other words, it has got different layers of rocks which include sedimentary rocks on the top, then there are granitic and metamorphic rocks in the middle and finally, at the bottom, there are basaltic rocks.

The crust of the earth also comprises of various large dynamic tectonic plates. These tectonic plates move slowly but constantly. They keep moving at an average rate of around 10 cm.

We will now move on to the different types of the lithosphere. They mainly divide into two types, they are:

We consider the thickness of the lithosphere to be the depth to the isotherm which is connected with the transition between brittle and viscous behaviour. The temperature at which olivine starts to deform viscously (~1000 °C) is frequently used to set this isotherm since olivine is usually the weakest mineral in the upper mantle.

Oceanic lithosphere is usually about 50–140 km thick. However, beneath the mid-ocean ridges is no thicker than the crust. Whereas, the continental lithosphere is around 40 km to about 280 km thick.

Oceanic lithosphere comprises majorly of mafic crust and ultramafic mantle (peridotite). Further, it is denser than continental lithosphere, for which the mantle links with crust compose of felsic rocks.

It keeps thickening as it starts ageing and moves away from the mid-ocean ridge. This thickening takes place via conductive cooling, which converts hot asthenosphere into the lithospheric mantle.

Therefore, it results in the oceanic lithosphere becoming more and more thick and dense with its age. In reality, it is a thermal boundary layer for the convection in the mantle.

Further, we see that oceanic lithosphere is not as dense as the asthenosphere, it is less dense. But, after tens of millions of years, it keeps becoming increasingly denser than the asthenosphere.

It happens so as the chemically differentiated oceanic crust is lighter than asthenosphere, however, thermal contraction of the mantle lithosphere makes it denser than the asthenosphere.

Further, new oceanic lithosphere constantly produces at mid-ocean ridges and recycles back to the mantle at subduction zones. Consequently, it is much younger than continental lithosphere.

In the early 21st century, many geophysical studies speculate that large pieces of the lithosphere have been subducted into the mantle. It is as deep as 2900 km to near the core-mantle boundary.

Whereas, the other is floating in the upper mantle and some are sticking down into the mantle as far as 400 km. However, they remain attached to the continental plate above.

Question 1: What is lithosphere?

Answer 1: Lithosphere refers to the rigid, rocky outer layer of the Earth. It comprises of the crust and the solid outermost layer of the upper mantle. Moreover, it extends to a depth of about 60 miles. It breaks up into around a dozen separate, rigid blocks, or plates.

Question 2: Why is the lithosphere important?

Answer 2: It is fundamentally important because it is the area on which the biosphere i.e. the living things on earth inhabit and live upon. If there wouldn’t be tectonic plates of the lithosphere, there won’t be any change on our planet Earth.

Question 3: Why is the lithosphere divided into plates?

Answer 3: The lithosphere divides into huge slabs. We refer to them as tectonic plates. Further, the heat from the mantle makes the rocks at the bottom of the lithosphere turn slightly soft. Thus, it results in the plates to move.