Total Probability of an experiment means the likelihood of its occurrence. This likelihood is contributed towards by the various smaller events that the event may be composed of. The total probability gives us an idea of the likelihood that an event is supposed to occur or not. There is a trick to it though. The total probability of any can never be negative. Moreover, it can never be greater than 1! Let us see why it is so and what we can do with this information in our hand. 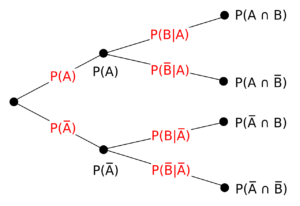 As you may see from the definition of this probability itself, P(R) can never be greater than 1. If P(R) is greater than 1, that means the event can give an outcome R in more ways than it can happen or occur which is absurd and logically incorrect. Hence the value of P(R) or for any event will be less than 1.

The term in the numerator defines the total number of ways in which this event can happen so it is equal to N. hence we can write that P (Total) = N/N = 1.

Example 1: A compound event can occur in 3 ways, each of which is equally likely. The probability in the first and the second event is observed to be 1/2 and 1/3 respectively. Then the following will be true for the probability of the third event:

A) The probability of the third event is greater than the second event.

B) P (the third event) is greater than the first event.

C) The probability of the third event is 1/6.

D) Both the options A) and C) are exactly correct.

Answer: We know that the probabilities of all the outcomes of an event sum up to 1. Since we are given that the event can happen in only three ways, we can say that if A, B and C are those ways then: