Water bodies are an accumulation of water on the surface of the earth. We refer this term to ocean, sea and more. That is why it makes it significant to understand the difference between ocean and sea. It will help us in clearing a lot of misconceptions. Oceans are vast bodies of water covering around 70% of the earth’s surface. On the other hand, seas are smaller bodies which land partially encloses. Thus, you see that the five oceans of our earth are just one large interconnected water body. On the contrary, we have around 50 smaller seas that are spread throughout the world. We will be able to learn their differences when we take a closer look at their depth, area, and marine life.

Oceans are gigantic masses of water that covers around 70% of the earth. They are larger than the sea and deeper too. Moreover, the movement of the ocean’s currents impacts the weather of the world all over. This waterbody between continents comprises of saltwater. It goes on to join the smaller seas. There are five oceans in the world, the Pacific ocean, Atlantic ocean, the Arctic ocean, the Indian ocean and the Antarctic ocean. Due to the largeness and depth of the ocean, it is inhabitable for most marine life. You will commonly find microscopic planktons, bacteria and shrimps in here.

Sea refers to a body of water which is smaller in size than the ocean. It is where the ocean meets the land and comprises of saline water. In total, you find seven seas all over the world. All of them partially enclosed by land except for the Caspian Sea, which is enclosed by land on all sides. Moreover, you will find marine life in abundance in the sea because of it being closer to land and less deep than the ocean. Thus, it makes a perfect habitat for marine life. Further, the sea’s temperature and location determine the marine life which inhabits the particular sea.

Difference Between Ocean and Sea 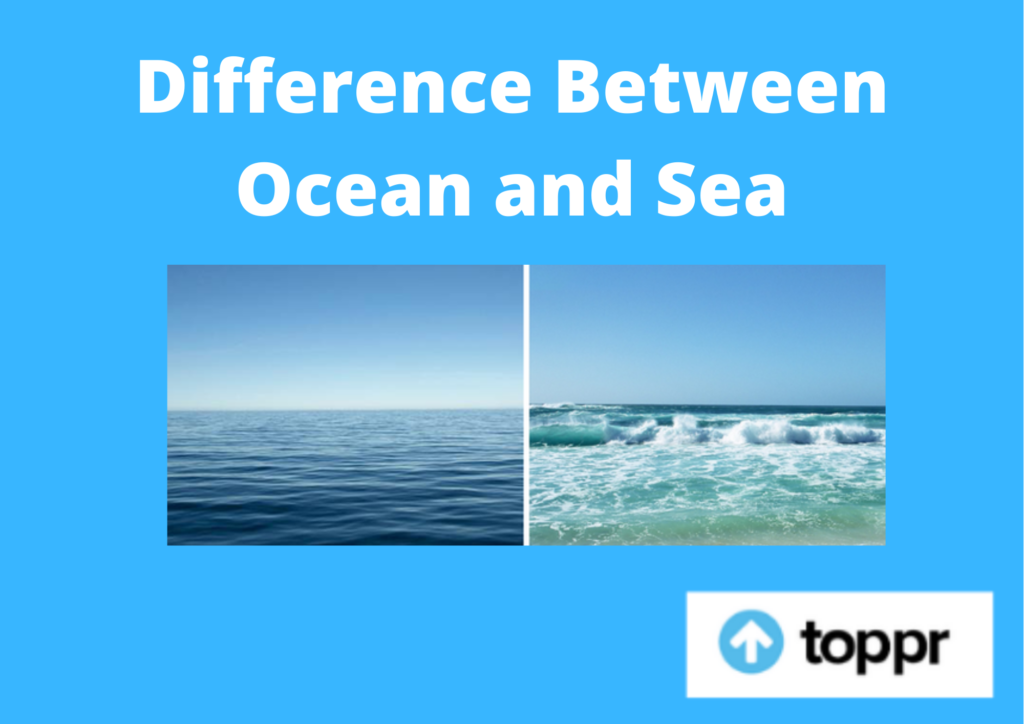 Difference Between Ocean and Sea

Important Difference between Ocean and Sea

Oceans do not have that many aquatic plants because of their depth, the sunlight does not penetrate it deep enough. Thus, photosynthesis cannot take place in plants. Moreover, the major use of oceans is done for industrial purposes.

For instance, mining for natural gas, crude oil and more. It is indeed very dangerous to dive in the ocean on a submarine but it gives us crude oil and abundant natural gas. In addition, oceans are what geographically divide our lands.

Seas are not that deep allowing penetration of sunlight thereby making photosynthesis in plants possible. Thus, we have so many aquatic plants in there. Sea has various commercial uses, mainly for the industry of fishing.

Further, beaches are great tourist spots which let people enjoy the cruise, speed boats and jet skis to sail. Similarly, they are also perfect for events like parties, wedding, and water sports. In addition, we also use it to produce hydroelectricity.

Moreover, you will find them to be more useful than oceans. We get salt from it, and it also controls the earth’s climate through evaporation and condensation. Finally, all seas are oceans that ultimately join the oceans.

FAQs about Ocean and Sea

Question 1: What is the difference between ocean and sea in terms of the type of water?

Question 2: Which is the smallest ocean in the world?

Answer 2: The smallest ocean in the world is the Arctic Ocean.