You have now a brief idea of why different elements behave differently. But do you a know a major part of it is because of the “nature” of the bonds in the compounds. Just like you and your best friends have a number of differences due to the “inner” qualities, so is the case with ionic and covalent compounds. In this chapter, we will learn more about the concept of covalent compounds, look at their properties and more.

What is a Covalent Compound?

Covalent compounds are the ones having strong intra-molecular bonds. This is because the atoms within the covalent molecules are very tightly held together. Each molecule is indeed quite separate and the force of attraction between the individual molecules in a covalent compound tends to be weak.

We require very little energy in separating the molecules. This is because of the attractive forces between the molecules with the absence of overall electric charge. Covalent compounds are usually gaseous molecules at room temperature and pressure. They might also be liquids with low relatively low boiling points.

These characteristics could be attributed to their weak intermolecular forces which hold these atoms together. However, we also have a lot of solid covalent compounds. They have low melting points. However, it is interesting to note that a small number of these have a completely different structure. They form huge structures where a huge number of atoms are held together. This is possible due to the presence of shared electrons.

These giant molecular structures are basically lattices made up of molecules which are held together by covalent bonds structure. These covalent bonds are very strong. They also tend to be very hard with high melting points which are different from most of the covalent compounds. The example of this kind of covalent compounds includes diamond and graphite of carbon atom network. They also include silica of silicon and oxygen atoms network. 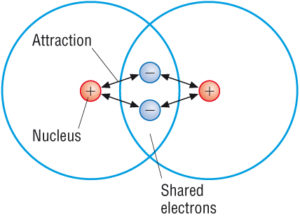 Question: Why are covalent compounds not soluble in water?