Nothing is perfect! Haven’t you heard it too many times in your life? Yeah, and it’s true! This belief applies to chemistry as well. If you thought that the Lewis theory explained all about compounds and molecules, you are wrong! It failed to explain many concepts and that is why we have the Valence Bond Theory. Here, we will read more about the valence bond theory and also look at its limitations. Yes, even this theory isn’t perfect guys! Let’s learn why.

Why a Need for Valence Bond Theory Arose?

Valence bond theory describes the electronic structure of molecules. The theory says that electrons fill the atomic orbitals of an atom within a molecule. It also states that the nucleus of one atom is attracted to the electrons of another atom. Now, we move on and look at the various postulates of the valence bond theory. 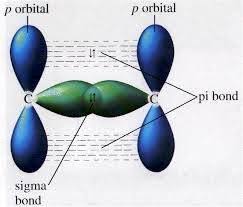 As we pointed out earlier, nothing is perfect! In a similar way, the Valence Bond theory is also not perfect. It has its own set of limitations. They are:

Question: Based on the overlapping of orbitals, how many types of covalent bonds are formed and what are they?

Answer: Based on the overlapping of orbitals, two types of covalent bonds are formed. These are known as sigma(σ) and pi(π) bonds.