So, why do the reactions occur as they occur? Can you mix just hydrogen and oxygen in a gas chamber and get the water that you drink? No! That is why we are going to look at the fundamentals of chemical bonding in this chapter. We will first understand what chemical bonding actually is. Then we will look at its types and more.

What is Chemical Bonding?

Why do different elements or substances undergo a transformation under a set of condition? As students of chemistry, we must know that. The answer to this interesting question lies in the chapter of fundamentals of chemical bonding.

In cases where the force is attractive, the two atoms get bound together. Such a force is what we call a chemical bond. Thus, we can define chemical bonding as follows: “The attractive force which holds various constituents (atom, ions, etc.) together and stabilizes them by the overall loss of energy is chemical bonding.”

Learn the Tricks In understanding the Chemical Bonding

Like many other people, you might also question why do some atoms combine with only specific atoms? How do we know which pair of atoms will combine and which will not? Well, there are reasons behind this. Let us explore in the below segment.

Atoms combine together to lose their energy. This would make them stable.

This is mainly because a compound forms only when there is an attractive force leading to the lowering of energy. On the other hand, in case of a repulsive force, we find an increase in overall energy of the system. Thus, we do not see the formation of any compounds.

To answer this question, we will have to combine our knowledge of the periodic table, the elements’ electronic configuration and the atomic structure.

Atoms gain stability by majorly four types of bonding methods. They are:

Covalent bonding is the most common method of bonding that we witness in compounds containing carbon. These are basically the organic compounds. A Covalent bond signifies the sharing of electrons between atoms.

In such cases, we know that there is a formation of a new orbit by the shared pair of electrons. This orbit extends around the nuclei of both the atoms and creates a new molecule. 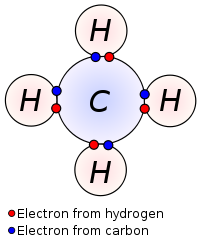 A covalent bond can be of two types:

In a Polar bond, we witness the electrons to be shared unequally. These tend to be closer to one atom than the other. Due to this uneven distance between the electron and atom, a charge difference is created in the different parts of the atom.

Because of this, one end of the molecule will be slightly positively charged and the other end is slightly negatively charged. Water is an example of a polar molecule.

A hydrogen bond is a weaker form of bonding as a contrast to ionic and covalent bonding. Hydrogen bonding is a type of polar covalent bonding (O-H bonding). In this case, the hydrogen has a slightly positive charge. This means that electrons are pulled more towards the other element.

Hydrogen bonds are responsible for many important characteristics of the substances around us. Some of these instances include the structure of DNA, proteins and the properties of water.

Q: What are London dispersion forces?

Ans: London dispersion forces are those that occur due to the temporary imbalances of charge occurring inside an atom. The concentration of charge of the atoms undergoes constant changes as these electrons are always in motion. This creates a temporary shift in the overall charge distribution of the atom.

When this particle happened to come in contact with another, the temporary imbalance of charge will result in an attraction of positive and negative charges. These are the London dispersion forces.