Summary of Two Stories about Flying

In this article, you will be reading two Stories about Flying Summary which is present in two parts. The author of the part-1 titled ‘His First Flight’ is Liam OH Hearty, while the author of part-2 titled ‘Black Aeroplane’ is Frederick Forsryth. In the first part, the readers come to know about the younger bird seagull. The bird is very afraid to fly for the first time. It feels that its wing will not support while flying. The writer gives a beautiful narration of the story about how the bird overcomes this fear. In the second part, the writer narrates the story about a student who is returning back to England on a flight. The story describes the events that happen on the way and his narrow escape from death with the help of a mysterious Aeroplane. 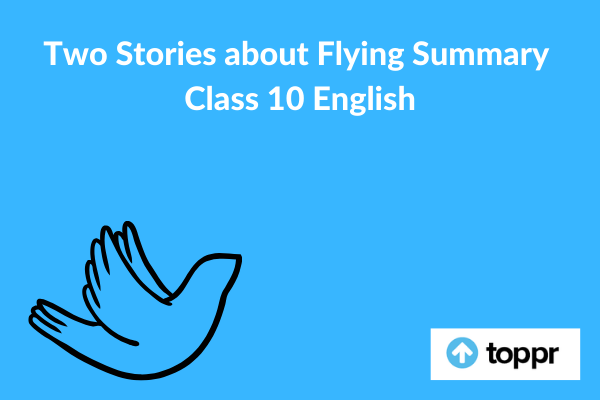 The story of His First Flight is based on a young seagull who is afraid to fly because of distrust on its wings. All his younger siblings can fly fearlessly despite their shorter wings. On the other hand, the young bird cannot gather the courage to trust his wings. He always becomes afraid when coming forward to the brink of the ledge and attempting to fly. His mother and father come around calling him and threatening him starve on the ledge unless he flies. Despite all the upbraiding and calling to him shrilly, he could not move. All-day long he watches his parents fly with his siblings and teaching them how to skim the waves.

One day the whole family flies to a big plateau and on the opposite cliff, the seagull is sitting hungry. He begs his mother to bring him some food. His mother picks a piece of fish and flies across to him. Maddened by hunger, he jumped at the fish with a loud shout. He falls outward and downward into space and he can feel his wings cutting through the air. The next moment he is flying fearlessly and his siblings soaring and diving with him.

The narrator of the story, Black Aeroplane is a pilot who elaborates on his misjudgment and how it creates problems. In the lesson, the pilot is flying from Paris to London and dreams about the holiday with his family. He is flying over a city and thinks about the tasty breakfast after landing. After crossing Paris he gets a look of the dark clouds, signifying the upcoming storm. For the sake of safety, he should turn back to Paris but he decided otherwise. To fulfil his dream of a holiday, he risks the life of passengers and heads the plane into the storm.

Everything gets dark and all the instruments stop working. He lost control of the plane and the hope of their survival becomes bleak. The very less amount of fuel is left and the pilot starts panicking in the situation. Suddenly he sees another plane flying next to him through the storm. The pilot turns his plane to the north in order to follow the strange Aeroplane. The pilot starts frightening again as the fuel is getting low. The anonymous pilot guides them out of the storm and disappears. After landing, the pilot asks about the other plane but is left in shock to know that there was no other plane in the sky, except his.

Conclusion of Two Stories about Flying

The first part of the story teaches us that the inner strength of the person is always helpful in overcoming difficult situations, while the second part teaches us that we should not risk the lives of others to fulfil our dreams.