Have you ever observed water in a lake or pond? The pattern of waves that generate after a disturbance occurs in the water body, what do you call it? In this case, water waves are in the visible form; however, there are sound waves, radio waves, etc., which aren’t visible but they exist! Yes, waves are always around us and are present in a variety of forms. Hence, in order to understand the importance and the types of waves, the following content is quite resourceful. Let us scroll down.

Apart from sound waves, there are strong waves, visible light waves, microwaves, stadium waves, earthquake waves, sine waves, cosine waves etc; which we encounter in our daily lives. Do remember that all waves are produced through disturbance. Let us take an example, when you throw a rock in the water there is an active generation of water pattern. These water waves hold two main parts which are the trough and crest.

Hence, whenever a wave travels from one location to other, every crest is chased up by a second crest and the pattern continues. Moreover, these crests are divided by a trough, which leads to the generation of crests & troughs pattern. According to physics, we can define waves as a periodical disturbance that propagates in a particular medium.

Waves take up different forms, and hence it is vital to learn about the types of waves. Below mentioned are the three categories of waves which are discussed with their sub-segments:

Mechanical Waves behave as a propagation of a particular disturbance traveling through a material medium as a result of the constant periodic motion of particles. Under this, the disturbance is transferred from one particle to the next.

To be more specific, energy and momentum transmit by the motion of particles in the medium. Mass transfer isn’t possible in this case. One must note that mechanical waves cannot propagate through the vacuum. The different examples of mechanical waves are the vibration of a string, the surface wave generated on the surface of a liquid and solid, tsunami waves, ultrasounds, earthquake P-waves, oscillations in spring, and waves in slink, etc.

There are two types of mechanical waves:

Learn about Transverse and Longitudinal Wave in more detail here 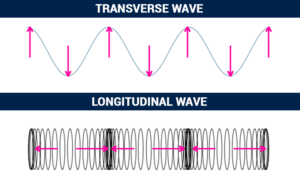 Under electromagnetic waves, the presence of medium isn’t actually necessary for propagation. In these types of waves, the periodic changes occur in electric and magnetic fields; therefore, it is termed as Electromagnetic Wave.

Q. What are the various types of E.M waves?

Ans: The EM spectrum comprises of different types of waves having varied wavelengths and frequencies. Do keep a note that, the wavelength, as well as frequency of the wave, tend to be inversely proportional in context to one another. Below mentioned are the different types of E.M waves present in the spectrum. Micro Waves, Radio Waves, Infrared Rays, Ultraviolet, Visible Light, Gamma Rays and X rays, are the prime E.M wave varieties.

Q. When Motorboat sails in water, what type of waves are produced?

Learn Principle of Superposition of Waves to know the answer.