Table of content
1 Suggested Videos
2 What is a wave?
2.1 Browse more Topics Under Waves
3 Types of Waves
3.1 Transverse Waves
3.2 Longitudinal Wave
3.3 Example
4 Question For You

What is a wave?

A wave is a movement caused in a medium from one point to another when an object comes in contact with it. For an example consider this: when you throw a stone in a river, there are patterns caused in a circular motion across the point where the stone hit the water. Here stone is the object and water is the medium and the patterns that are caused on the surface of the water are what we call waves.

When we look at these waves, it seems like they are traveling from one point to another. In the above example, it will seem like they are traveling from the center, outwards. Try another experiment, throw a cork in the already disturbed river. You will notice that the cork, which is porous and thus has lighter mass than water will keep floating up and down. Even though the waves are seemingly moving in the outward direction the cork stays put. This demonstrates that the waves, in fact, are not moving. These are just disturbances caused by the pebble.

The scientific analysis of waves has been dated back to the seventeenth century, although the concept of waves was around for much longer. There are several types and sub-types of waves that one can study as we delve deeper into the topic of waves. One of the ways of studying waves is to determine the direction of the movement of particles in the medium. Categorising waves on this basis we get two kinds of waves, they are:

This is a wave wherein the particles of the medium move in the direction that is perpendicular to that of the wave. For example consider this: when a rope is laid out horizontally in a room and a motion is introduced on the left end of the rope, then the energy that moves in the rope will move from left to right causing a simultaneous upward and downward movement in the rope. This type of wave created is a transverse wave. Characteristic of a transverse wave is that the motion of the particle is perpendicular to the motion of the wave. 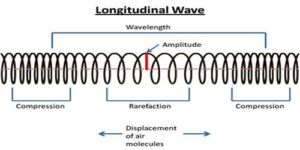 As the name suggests, a longitudinal wave is the one that moves parallel to the direction of waves of particles in motion. That is a straight parallel line above the particle. For instance in the same rope kept horizontally, if one introduces a pulse on the left and the right end, the energy flows from both ends trapping the movements in a parallel motion. These are longitudinal waves.

Generally, waves moving through a solid medium can either be longitudinal or transverse but the waves which travel through fluid mediums such as liquid or gas are always longitudinal waves. For transverse waves to occur, we will require a very concrete or rigid medium.

When the energy is transferred in a transverse wave, one particle moves and is supposed to exert a pull on the nearest particles. This is key for transverse waves, but where a medium is not rigid enough, such as liquid or gas, the particles will simply slide past one another. This is why, the disturbances caused in the ocean is usually longitudinal waves, but the ones caused during an earthquake can be transverse and longitudinal waves, depending upon where the epicenter of the event falls. As seismologists started studying more on waves, they realized that longitudinal waves can travel to the core of the earth, perhaps this is why the core of the earth has molten ore.

Longitudinal wave (like sound waves) required a material medium (e.g. air) for their transmission hence cannot pass through the vacuum.
If a ringing bell with a hammer is placed in an airtight container, the sound of the bell will be heard. The sound will decrease until all air from the container is removed. When there is a vacuum inside the container sound of the bell will not be heard even hammer is striking the bell. This proves longitudinal waves (like sound waves) cannot pass through the vacuum.