Although both the names sound almost similar there is much difference between absorption and adsorption. The main difference between absorption and adsorption is that absorption is the process in which a fluid dissolves by a liquid or a solid. In the case of Adsorption, the atoms, ions, or molecules from a substance adhere to a surface of the adsorbent. The absorption process involves atoms passing through or entering a large material. In adsorption, the molecules are held loosely on the surface of the adsorbent and can be easily removed.

When one substance enters the volume or bulk of another substance, this process is Absorption. Solid soaks the liquid or gas rather than any forces applied on molecules. The substance which gets absorbed is called absorbate and the substance which absorbs is called the absorbent. Absorption can be a chemical or a physical process.

The phenomenon of adhesion of the molecules of a substance on the surface of a liquid or solid is adsorption. The substance which gets adsorbed on a surface is called the adsorbate and the substance on which it is adsorbed is known as an adsorbent. The interface is the surface where the process takes place. Adsorption can be of two types: Physisorption and Chemisorption.

Difference Between Absorption and Adsorption: 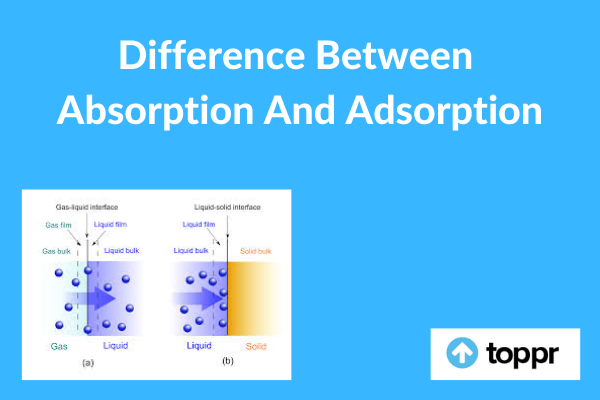 Difference Between Absorption And Adsorption

The important difference between absorption and adsorption

Absorption is a type of process in which atoms, molecules, or ions enter some bulk phase – liquid or solid material. Molecules that are undergoing the absorption process are taken up by the volume, not by the surface (as in the case for adsorption). The absorption process is the one in which something takes in another substance.

The absorption process means that a substance captures and transforms energy. Another difference between absorption and adsorption is that absorbent distributes the material it captures throughout the whole and adsorbent only distributes it through the surface. Commonly we can define when any type of gas or liquid penetrates into the body of adsorbent, it is absorption.

It is a process or phenomenon of sticking of atoms, ions, or molecules from a gas, liquid, or dissolved solid to a surface that takes place. Now this process forms a film of the adsorbate on the surface of the adsorbent. Like surface tension, adsorption is a consequence of surface energy.

There are many industrial applications of the Adsorption process. Such as heterogeneous catalysts, activated charcoal, capturing and providing cold water for air conditioning using the waste heat. Other process includes increasing storage capacity of carbide-derived carbons and water purification.

FAQs about Absorption And Adsorption:

Q.1. What does high absorption mean?

Ans- The proportion of the light absorbed will depend on how many molecules it interacts with. For example, in the case of a strongly colored organic concentrated dye solution, it will have a very high absorbance because there are lots of molecules to interact with the light.

Q.2. Why adsorption is always exothermic?

Ans- The particles are attached to the surface of another medium for the reaction to take place. During this process the residual forces on the surface of adsorbent decreases which in turn decreases the surface energy. This energy appears in the form of heat, hence adsorption is exothermic in nature.