There is a great difference between molecules and compounds which must be known by everyone. Molecules are when the chemical bonds unite any atoms (two or more). On the other hand, compounds are molecules consisting of different atoms (two or more) of different chemical elements. So, you see that all compounds are molecules but not all molecules cannot be called compounds. In simpler terms, any combination of atoms is a molecule. However, when the combination of atoms varies from elements, we refer to it as a compound. For instance, Hydrogen gas (H2), Oxygen (O2), water (H2O) are all molecules because they have two or more atoms. On the contrary, Calcium Carbonate (CaCO3), NaCl, H2O fall under the category of compounds because different elements with different atoms make them. Let us study in detail about the two:

When two or more atoms come together in order to create the recognizable unit where the pure substance is able to retain its chemical properties plus composition despite dividing the unit, we refer to it as a molecule.

However, if the molecule is made up of different atoms and elements, we refer to it as a heteronuclear. For instance, Water (H2O).

Therefore, we present compounds by their chemical formula. For instance, the chemical formula for water is H2O. Thus, it shows that the compound comprises of 2 molecules of hydrogen and one molecule of oxygen.

Difference between Molecules And Compounds 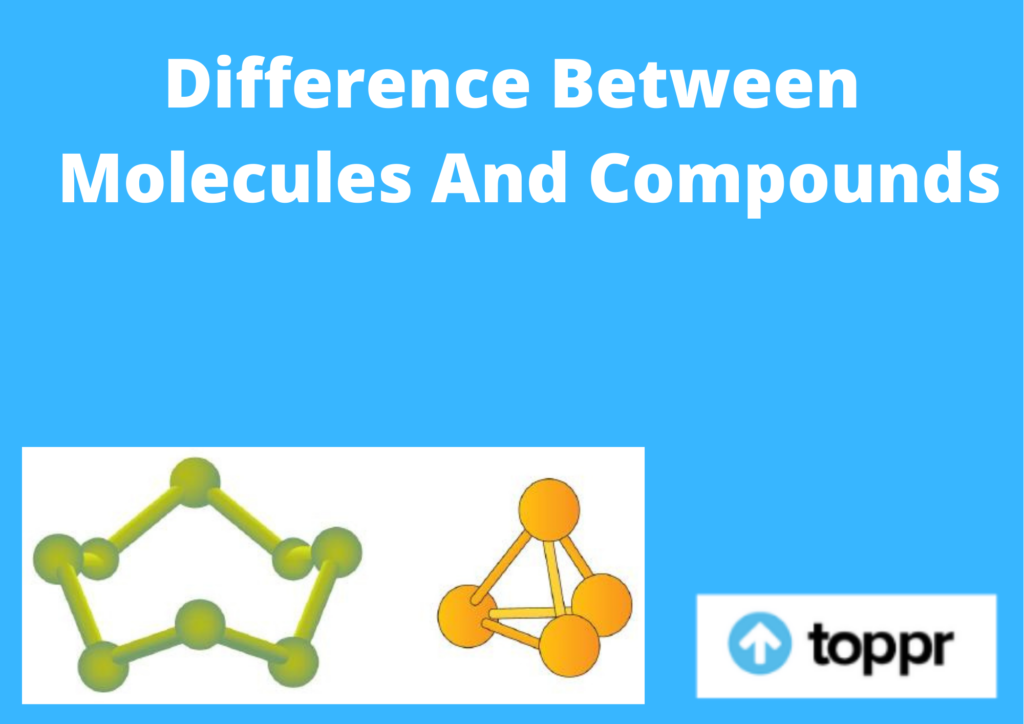 Important Difference between Molecules And Compounds

There are different types of molecules which are based on different things. Further, the ones based on the number of atoms per molecule are Diatomic, Triatomic and Polyatomic molecules.

Moreover, there are Homonuclear and Heteronuclear, Molecules. After that, there are organic and inorganic molecules. Finally, we have covalent and ionic molecules. Thus, they are based on the bond they share which can be either of the two.

Further, we have organic and inorganic compounds. Finally, there are covalent and ionic compounds. We differentiate them on the basis of covalent bonds or ionic bond.

FAQs about Difference Between Molecules And Compounds

Question 1: What are the diatomic, triatomic and polyatomic molecules based on?

Answer 1: All these molecules are based on the number of atoms per molecule.

Question 2: What is the difference between molecules and compounds?

Answer 2: The difference between molecules and compounds is that molecules can be unstable whereas compounds are always stable.