A solute is a substance that can be dissolved by a solvent to create a solution. A solute can come in many forms. It can be gas, liquid, or solid. The solvent, or substance that dissolves the solute, breaks the solute apart and distributes the solute molecules equally. This creates a homogenous mixture.

A material in which solute dissolves, resulting in a solution is a solvent. We always find solvent as a liquid but it can also be a solid, a gas, or a supercritical fluid.

Difference between Solute and Solvent 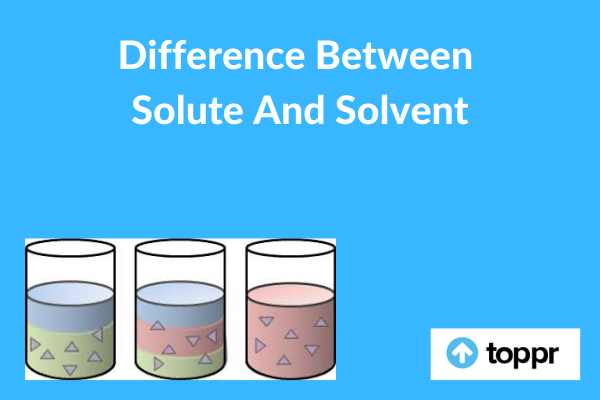 The important difference between solute and solvent

We define solute as a substance that is dissolved in a solvent. A solute is a component of a solvent which, upon getting dissolved, changes its form and loses its original characteristics. A solute is usually in smaller amounts in the solvent. A common example of solute is salt and water. Salt dissolves in water and therefore, salt is the solute.

The solvent is a liquid, in which other materials dissolve to form a solution. Now  Polar solvents like water, favor the formation of ions while nonpolar ones like hydrocarbons do not. Solvents may be acidic, basic, amphoteric (both), or aprotic (neither).

FAQs about Solute and Solvent:

Q.1. What is the overall effect of adding a solute to a solution?

2. The higher boiling point of the solution relative to that of the pure solvent.

3. The lower freezing point of the solution relative to that of the pure solvent.

Ans- Due to its polarity and ability to form hydrogen bonds, water makes an excellent solvent, meaning that it can dissolve many different kinds of molecules.