The study of atoms and its related traits lay the foundation for chemistry. Atomic mass is the concept related to a single atom, whereas molecular mass relates to a group of atoms. If you are planning to proceed with this concept, then it is necessary to gain precise knowledge about molecular mass and mole concept. Let us proceed!

You can call the molecular mass of a substance as the relative mass of its molecule when compared with the mass of 12C atom considered as 12-units. In simple terms, it points out the number of times; 1 molecule of the concerned substance is weightier than an atom.

Always remember that molecular mass is equivalent to the sum of atomic masses for all atoms available in a molecule of the target substance.

RMM or Relative molecular mass is the molecular weight of an element or compound. You can call it as the number of times a single molecule of the substance stays heavier than the 1/12th mass of carbon atom (12C).

It is vital to note that, the identity of a substance not only contains the type of atoms but also the quantity of each atom type. In today’s time, we have access to sophisticated instruments which permit the direct measurement microscopic traits.

But, the same traits were previously derived from the evaluation of macroscopic properties using comparatively simple tools. Such an experimental approach did require the introduction of a fresh unit for defining the quantity of substances, called as the mole. 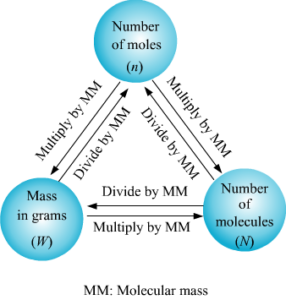 It is interesting to know that, to date, this unit stays essential for modern chemical science. What is a mole? It is an amount unit that can be seen similar to familiar units such as a pair, gross, dozen etc. To be precise, it offers a specific measure of the count of atoms or molecules present in a sample bulk matter.

Furthermore, a mole can be defined as the quantity of substance comprising the same number of distinct entities (like atoms, ions, and molecules) as the count of atoms in a sample comprising pure 12C weighing accurately 12 g. The mole offers a link between a simply calculated macroscopic property (bulk mass) and a truly significant fundamental property (number of atoms, molecules etc.).

The count of units forming a mole has been determined experimentally as 6.02214179 × 1023. This is called as the fundamental constant termed as Avogadro’s number (NA) or Avogadro constant. In chemistry, this constant is suitably reported using an explicit unit called per mole.

Watch Videos on Concept of Mole

Q. Derive Grams from Moles for a specific element. A litre of air comprising 9.2 × 10−4 mol argon. How to calculate the mass of Ar in the air (1 litre)?

Ans: The molar quantity of Ar is available and should be used for deriving the corresponding mass in terms of grams. Note that, the amount of Ar is mentioned less than 1 mole; hence, the mass will be less than the mass of 1 mole of Ar, roughly 40 g. Furthermore, the molar quantity in question is roughly one-one thousandth or (~10−3) of a mole.  So, the corresponding mass needs to be roughly one-one thousandth of molar mass (~0.04 g):