Air pollution is fast becoming one of the most eminent problems we are facing. Once what was only considered a nuisance has now become a global crisis. Everything we have learned about air pollution can be expressed in terms of chemistry. The pollutants go through chemical changes in the atmosphere and become toxic to the biosphere. Let us take a look at atmospheric pollution.

We live on the Earth’s surface, in the biosphere. Just above us, enveloping the earth is the atmosphere. The lowest region of this atmosphere is the troposphere. It extends up to 10 km from the Earth’s surface and then comes the stratosphere. Everything from wind currents, cloud formation, precipitation etc happens in this two layers.

We have already learned that there are various pollutants responsible for the air pollution. In terms of environmental chemistry, these pollutants are broadly divided into two categories – Gaseous Pollutants and Particulate pollutants (solid pollutants). Let us see which specific pollutants we are dealing with. 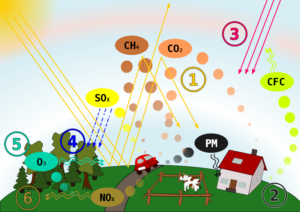 These are the main culprits of atmospheric pollution. They are also the most recognized air pollutants. The major flaw of oxides of carbon is that they are one of the main pollutants that cause the deadly greenhouse effect on the planet.

Carbon Monoxide is a dangerous, poisonous pollutant that harms our environment in many ways. The major source of CO is incomplete combustion of fossil fuels like coal, wood, charcoal etc. Even exhaust from cars contains small amounts of Carbon Monoxide.

The other carbon oxide and the most well know pollutant in the world is Carbon Dioxide. CO2 is actually an essential element for human survival because plants need it to perform photosynthesis. However it is currently present in our atmosphere and our surroundings, in extremely large quantities, and this is harmful to humans.

Carbon Dioxide is mainly released due to the burning of fossil fuels. This is something we do for nearly everything in our day to day lives. From manufacturing activities to running our cars to launching rockets they all need to burn fossil fuels. This is why it is so hard to control the emissions of CO2. 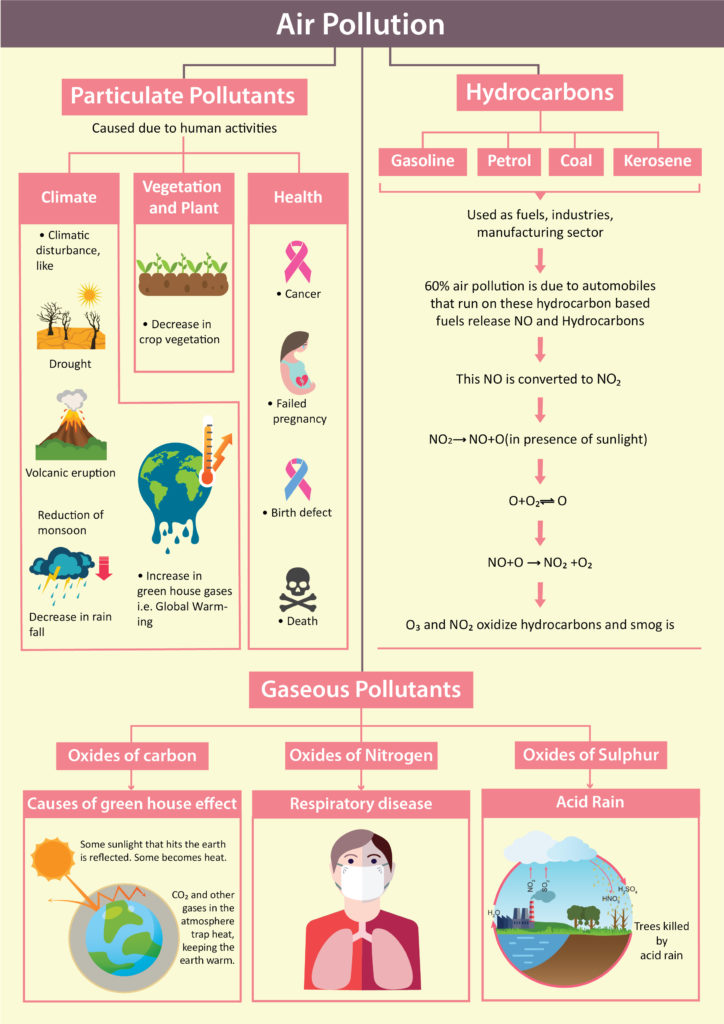 These are another class of pollutants dangerous due to the harm they cause to living beings. Sulphur Dioxide (SO2) in particular is a nasty pollutant that is very dangerous in high concentration. In fact, these pollutants can cause respiratory distress and lung diseases in humans.

One major source for SO2 is the combustion of petroleum products that contain sulphur. Sometimes even charcoal contains traces of sulphur and releases SO2 during combustion. One natural source of Sulphur oxides is volcanic eruptions.

This sulphur dioxide may also get oxidized and turn to SO3. And then when reacted with moisture or water it becomes Sulphuric Acid and precipitates on Earth as Acid Rain.

Nitrogen is actually the most abundant gas in our atmosphere. It accounts for 78% composition in air. However, oxides of nitrogen are a major pollutant of atmospheric pollution. Just like Carbon dioxide and monoxide, nitrous oxides are also majorly released by vehicle emissions.

One other natural activity that produces nitrogen oxides is lightning. When lightning strikes dioxygen and dinitrogen combine at very high temperatures. Nitrogen Dioxide (NO2) is one of the most dangerous pollutants there is. It has a red-brown color that one often sees over traffic jams and in fumes coming out of factories.

To humans, it is particularly harmful as it directly attacks our respiratory systems. In high concentrations, it may cause pulmonary oedema & haemorrhage. It is toxic to plants too and slows down their photosynthesis rate.

Particulate matter is the collective of all solid and liquid particles suspended in the atmosphere which are polluting and harmful to our biosphere. These particles originate and various different sources and are of many sizes and compositions. This particulate matter may originate in this form or can even be caused due to gaseous pollutants reacting with elements and becoming particulate matter.

The size and shape of the particulate matter play a big role in how harmful they are to the atmospheric pollution. Let us take a look at a few of these pollutants.

Q: Low visibility during cold weather is due to:

Ans: The correct answer is “B”. The suspended particles like unburnt carbon particles and hydrocarbons mix with smoke and fog, especially in the cold weather and the visibility is lowered. This is smog (Smog = Smoke + Fog).