The particles were named electrons. J.J Thomson believed electrons to be two thousand times lighter than a proton. He assumed that an atom is composed of a cloud of negative charge in a sphere of positive charges. J.J Thomson and Rutherford first demonstrated the ionization of air in x rays.

Learn about the concept of an Atomic number here in detail.

Thomson Model of an atom

The description of Thomson’s atomic model is one of the many scientific models of the atom. It was proposed by J.J Thomson in the year 1904 just after the discovery of electrons. However, at that time the atomic nucleus was yet to be discovered. So, he proposed a model on the basis of known properties available at that time. The known properties are: 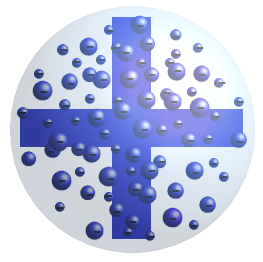 Learn about the Rutherford’s Atomic Model in detail here.

Even though Thomson’s atomic model was inaccurate and had a few drawbacks, it provided the base for several other atomic structure models afterward. It is one of the foundation models that led to significant and revolutionary inventions later.

Question: Who gave the first model of an atom?

Solution: The answer is 2 (J.J. Thomson)

Share with friends
Previous
Environment and Sustainable Development
Next
Vernalisation