What are Group 15 Elements?

The general valence shell electronic setup of group fifteen elements is ns2, np1-6. The electronic design of helium is 1s2. It has no orbitals. However, it is a p-block element since it takes the physical and chemical properties after that of other p-block elements of the eighteenth group. P-block elements are generally non-metals, while the remaining are metalloids and metals.

Group 15 elements include nitrogen, phosphorus, arsenic, antimony and bismuth. Nitrogen is the real constituent of the air and records for 78% of it by volume. It is the primary member of this group and happens in a free state as a diatomic gas, N2.

Phosphorus is a fundamental constituent of animal and plant matter. Phosphate groups are constituents of nucleic acids, that is, DNA and RNA. Around 60% of bones and teeth are made out of phosphates. Phosphoproteins are available in egg yolk, milk, and bone marrow. The rest of the elements of the group, that is, arsenic, antimony, and bismuth, mostly happen as sulfides. For example, Stibnite, Arsenopyrite, and bismuth glance.

Learn more about the Characteristics of Group 16 Elements. 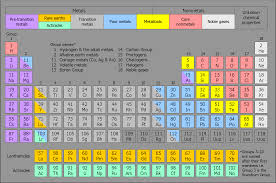 Let us now look at some of the trends of atomic properties of these elements.

Moving down the group, the ionic radii, and atomic radii increases. This is because of the expansion of another main energy level in each progressive element.

These elements demonstrate higher values of ionization enthalpy when contrasted with group 14 elements. As we move down the group, the ionization enthalpy values keep on decreasing. This is because of the progressive increase in the size of the nucleus.

Electronegativity is the inclination of a particle to pull in a shared pair of electrons more towards itself. The electronegativity decreases gradually on moving down the group. The reason behind this is the increase in atomic radius.

Physical properties incorporate physical state, boiling and melting points, metallic character, allotropy, and density. Nitrogen is a diatomic gas, while the rest of the elements are solids in nature.

Moving down a group, metallic character increases. On the other hand, the ionization enthalpy of the elements decreases due to an increase in their nuclear size.

5) Trends in Melting and Boiling Points

The density of these elements increases from nitrogen to bismuth.

Q: Write a note on the oxidation states of the group 15 elements.

Ans: Every one of the elements of group 15 has 5 electrons in their outermost circle. They require just 3 electrons to finish their octet setup. The octet can be accomplished either by picking up 3 electrons or by sharing 3 electrons by a method for covalent bonds.

Accordingly, the basic negative oxidation state of these elements is – 3. Moving down the group, the propensity to display – 3 oxidation state diminishes. This is because of the expansion in nuclear size and metallic character.

Group 15 elements additionally indicate positive oxidation states of +3 and +5 by developing covalent bonds. Because of the inert pair effect, the +5 oxidation state stability diminishes down the group, while that of +3 oxidation state increments.

Nitrogen has just s and p-orbitals, yet no d-orbitals in its valence shell. Therefore, nitrogen can demonstrate a most extreme covalency of 4. A covalency of four is reached by the sharing of its lone pair of electrons to another iota or particle.