A junction transistor can be used as a device application like a switch, amplifier etc. depending on many parameters.

Our focus is the CE configuration and we will concentrate on the biasing and operation region to understand how the device works.

Junction Transistor as a Switch

When a junction transistor is used in the cutoff or saturation state, it acts as a switch. Let’s look at a base-biased transistor, as shown in the figure below, in the CE configuration and analyze its behaviour to understand the operation of a transistor as a switch.

Now, let’s apply Kirchhoff’s voltage rule to the input and output sides of this circuit. It is easy to understand that

Next, let’s observe the change in Vo as Vi increases from zero

A Silicon junction transistor remains in a state of Cutoff as long as Vi is less than 0.6 V. Also, IC = 0. Hence, Vo = VCC. When Vi goes beyond 0.6 V, the transistor moves into an active state. Also, IC > 0 and Vo decreases (since ICRC increases). Initially, IC increases almost linearly with increasing Vi.

Also, Vo decreases linearly till its value falls below 1 V. Post this, the change becomes non-linear and the transistor moves into the saturation state. On increasing Vi further, Vo decreases but never becomes zero. Here is a plot of Vo vs. Vi (also called the transfer characteristics of a base-biased transistor): 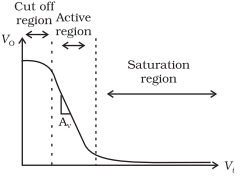 In the above graph, we can see that the transition from Cutoff to Active state and Active to Saturation state is not sharply defined. You can see non-linear regions in these areas.

How to operate a junction transistor as a switch?

Junction Transistor as an Amplifier

To use a junction transistor as an amplifier we will focus on the active region of the Vo vs. Vi curve shown above. If you observe this region, the linear part of the curve is the change of the output with the input. However, the output decreases as input increases because,

Now, if we consider ΔVo and ΔVi as small changes in the output and input voltages, then the small signal gain of the amplifier (AV) is

If the VBB voltage has a fixed value corresponding to the mid-point of the active region, then the circuit will behave like a CE amplifier having a voltage gain of ΔVo/ ΔVi.

The voltage gain is expressed as follows:

However, ΔVBE is negligibly small as compared to RBΔIB in this circuit. Hence, the voltage gain of this CE amplifier is

The Configuration of a Junction Transistor as an Amplifier

Eventually, these will lead to a change in the value of Vo. AC variations can be measured by blocking the dc voltages by using large capacitors. Up until now, we have not spoken about ac signals. And the fact is, amplifiers are used to amplify alternating signals. So, let’s superimpose an ac input signal (vi) on the dc bias (VBB) as shown below.

The output is measured between the collector and ground.

Let’s look at how the amplifier works.

Initially, let’s assume that vi = 0. Applying Kirchhoff’s law, for the output loop we get

And, for the input loop, we get,

If vi is not zero, then

Now, a change in VBE can be related to the input resistance ri and a change in IB. Hence,

A change in IB causes a change in IC. We define a parameter βac, which is similar to the βdc defined earlier, as

also known as ac current gain Ai. In the linear region of the output characteristics, βac is nearly equal to βdc. Also, a change in IC (due to a change in IB) affects a change in VCE. This causes the voltage to drop across resistor RL since VCC is constant. So,

We also know that the change in VCE is the output voltage Vo. Hence, we get

And the voltage gain of the amplifier is

Please note that the negative sign means that the output voltage has an opposite phase as of the input voltage. From the above calculations, we can find the power gain Ap as follows:

Remember, a transistor is not a power generating device. The energy for the higher ac power at the output is supplied by the battery.

Question: What are the parameters based on which a junction transistor is used as a device?

Solution: A junction transistor is used as a device based on the configuration used, biasing of the junctions, and the operation region. Configurations are Common Base, Collector, and Emitter. Biasing can be forward or reverse. Operation region includes cutoff, active and saturation regions.