While using a junction transistor as an amplifier we give a sinusoidal input to get an amplified signal at the output. In other words, in an amplifier, it is important to provide an ‘ac input’ to sustain an ‘ac output’. However, in an oscillator, you can get an ‘ac output’ without the need for any external input signal. Or, the oscillator is self-sustained.

Table of content
1 Suggested Videos
2 Junction transistor as a Feedback Amplifier
3 Understanding the Oscillator Action
3.1 Note: this is the FEEDBACK from input to output.
4 Summing up
5 Solved Examples for You

Junction transistor as a Feedback Amplifier

Take an amplifier and return a portion of the output back to the input in phase with the starting power as shown below.

This process is called ‘Positive Feedback’. To achieve this, you can use inductive coupling (via mutual induction) or LC or RC networks. There are different types of oscillators which use different coupling methods to feedback the output to the input. Also, they use a resonant circuit to get oscillation at a particular frequency. 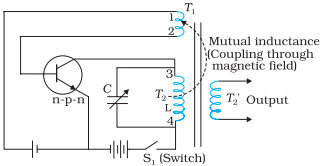 Observe that both T1 and T2 are wound on the same core. This means that they are inductively coupled through their mutual inductance. Also, the base-emitter junction is forward biased and the base-collector junction is reverse biased.

Now, assuming that the switch S1 is put on to apply a proper bias for the first time, a surge of current flows through the transistor. This current flows through the coil T2 (terminals number 3 and 4 in the diagram above). Also, the current increases slowly and does not reach full amplitude instantly as can be seen in the figure below. (Current increases from X to Y)

Now, the inductive coupling between coils T2 and T1 causes a current to flow in the emitter circuit.

Note: this is the FEEDBACK from input to output.

This positive feedback causes the emitter current (current in T1) to increase too (from X to Y as can be seen in the figure below).

Now, the collector current (current in T2) acquires a value ‘Y’ when the transistor is saturated. In simpler words, the maximum collector current is flowing and it cannot increase any further. This causes the magnetic field around T2 to stop increasing.

Since the magnetic field becomes static, feedback from T2 to T1 stops. This eventually causes the emitter current to fall which results in a decrease of the collector current from Y to Z. (Fig 3).

The circuit shown in Fig.2 has the tank or tuned circuit connected on the collector side of the junction transistor. This device is called Tuned Collector Oscillator. If it is connected to the base side, it will be called Tuned Base Oscillator.

Question: What is a positive feedback amplifier?

Solution: In an amplifier, when a part of the output is returned back to the input, in phase with the starting power, then the amplifier is called Positive Feedback Amplifier.