Characteristics of a CE Junction Transistor 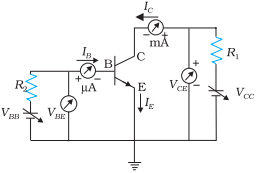 Since we intend to study the input characteristics when the transistor is in an active state, VCE is maintained at a large value. The value chosen is large enough to ensure reverse biasing of the base-collector junction. For a Silicon transistor, VCE = 0.6-0.7 V. Also, 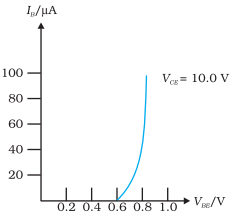 To study the output characteristics, let’s plot a curve is between the Collector current (IC) and the collector-emitter voltage (VCE). Also, keep the base current (IB) at a steady value.

Now, if the base-emitter current (VBE) is increased by a small amount, you can observe an increase in hole current from the emitter and electron current from the base regions. Hence, IB and IC increase proportionally. Or, if IB increases, IC increases too. So, keeping IB constant and plotting IC against VCE, you can make the following observations: 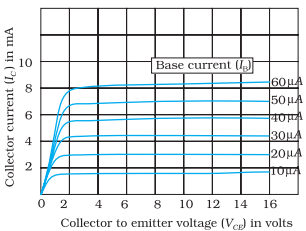 For every value of IB, the plot of IC versus VCE displays one output characteristic.

Now, let’s calculate some important ac parameters of transistors using the linear segments of the input and output characteristics.

This is ac resistance or dynamic resistance and which is obvious in the input characteristics since its value varies with the operating current in the transistor.

A close look at the output characteristics reveals that initially, IC increases linearly for every small change in the value of VCE. The reason is simple – the base-collector junction is not reverse biased and the transistor is not active. On the contrary, the transistor is in a saturation state.

Hence, the current is controlled by the supply voltage (VCC) in this part of the characteristic. In this state VCC = VCE. As VCE increases and reaches a value which is higher than that required to reverse bias the junction, IC increases marginally with increasing VCE. This reciprocal of the slope of the linear part of the output characteristics offers the value of ro.

Current Amplification Factor (β) is the ratio of change in the collector current (IC) to the change in base current (IB) when the collector-emitter voltage (VCE) is kept constant. Also, the transistor is in an active state. Now, the small signal current gain is

This has a large value. On the other hand, if we take a simple ratio of IC and IB, we get βdc of the junction transistor.

It is important to note that IC and IB increase almost linearly. In simple words, if IB=0, then IC=0. Hence, the values of βac and βdc are nearly equal.

Question: What are the input and output characteristics of a CE Junction Transistor?

Solution: In a Common Emitter configuration of a Junction Transistor, the emitter is the common terminal. Input is between the base and emitter. The output is between the collector and emitter. Input characteristics are the variation of base current (IB) with the base-emitter voltage (VBE). Output characteristics are the variation of collector current (IC) with the collector-emitter voltage (VCE).