Now we are all a little accustomed to the periodic table. Aren’t we? Isn’t it a lot difficult to remember each of the properties of the elements? That is why we group them and study their properties. In this chapter, we will study about the Boron family that forms the 13th group in the periodic table. You know boron right? The popular fibreglass is a product of boron. Let us now study about these elements in greater details.

The group 13 elements consist of six elements. They are boron (B), aluminium (Al), gallium (Ga), Indium (In), thallium (Tl), and element 113. This element gets the name of ununtrium [Uut]. The commonest property of the group is that each one of the elements has three electrons in the outer shell of their nuclear structure.

Boron is the lightest of the elements in this group. It is a non-metal. Surprisingly, the others in the group are brilliant white metals. These elements have likewise been alluded to as icosagens and triads. 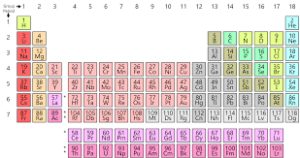 The Occurrence of the Boron Family

We find boron in limited quantities. It is mostly a product of the barrage of subatomic particles created from characteristic radioactivity. Aluminium is readily available on our planet. It is also the third most copious element in the Earth’s outside (8.3%).

We can find Gallium in the earth with a wealth of 13 parts per molecule. Indium is the 61st richest element in the world’s covering. Thallium is scattered in small amounts all over the planet. Ununtrium is not available naturally and thus, has been named a synthetic element.

In this section, we will look at the physical properties of the boron family.

Boron acts as a non-metal chemically. However, the rest of the elements show metallic properties. Why does this happen? A large portion of the irregularities seen in the properties of the group 13 elements is attributed to the expansion in Zeff(Effective Nuclear Charge). This emerges from the weakened protection of the atomic charge by the filled (n − 1) d10 and (n − 2) f14 subshells.

Rather than shaping a metallic grid with delocalized valence electrons, boron frames special aggregates that consist of multicenter bonds. This includes metal borides, in which boron attaches to other boron iotas. This arrangement creates three-dimensional systems or bunches with consistent geometric structures.

All the neutral compounds of the group 13 elements are electron lacking and act like Lewis acids. The trivalent halides of the heavier elements shape halogen-connected dimers that consist of electron-match bonds, as opposed to the delocalized electron-lacking bonds typical for diborane.

Their oxides break down in weakened acids, in spite of the fact that the oxides of aluminium and gallium are amphoteric. The group 13 elements never react with hydrogen because the valency of hydrogen is one and that of the boron family is three. The trihalides of group 13 elements are strong Lewis acids because they have the tendency to form compounds with electron-pair donors, the Lewis bases.

Q: Write down the applications of the boron family.