What is Particulate Pollution?

Particulate matter can be present in the atmosphere in the same form it is released from the source. Sometimes PM can undergo complex chemical reactions in the atmosphere. It is the deadliest type of air pollution because particulate matter can easily penetrate deep into the lungs and bloodstreams of human body unfiltered. Moreover, these particles vary from each other in shape, size, and composition.

Particulate matter on the basis of size can fall into two different categories:

Inhalable coarse particles are present in the nearby regions of dusty industries and roadways. Fine particles originate from forest fires. Moreover, they can also originate on a reaction of air with gases released from the industries, automobiles and power plants. 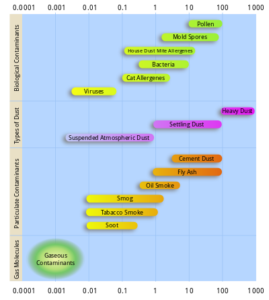 Smoke particulates contain a mixture of liquid and solid particles. Combustion of any kind of organic matter leads to the formation of smoke particles. Examples include the release of smoke from a cigarette, burning of garbage and dry leaves, burning of fossil fuel, oil, etc.

The size of dust particulates is more than 1 micrometer (μm) in diameter. Dust particulate matter originates from grinding, crushing, and attribution of solid substances. Examples of this type of particulate emission include the release of sawdust during word works, release of sand particles during sandblasting, pulverization of coal, release of fly ash and cement from factories, dust storms, etc.

Vapors in air undergo condensation to form a mist. Production of mist is also possible by particles of spray liquids. For instance, herbicides and pesticides are used in the form of sprays in agriculture but sometimes it is possible to miss the spray target and enter the atmosphere and form mists. Another example is the sulfuric acid mist.

Formation of fumes is possible by the condensation of vapors during different processes such as boiling, distillation, sublimation, and other types of chemical reactions. Organic solvents, metallic oxides, and metals undergo a chemical reaction to generate fume particles.

The adverse effect of the particulate pollutants will vary according to the particle size. Therefore, airborne particles like fumes, dust, mist, etc are harmful to human health. Larger particles of size more than 5 microns have the ability to enter and block the nasal passage. However, particles of the approximate size of 10 microns can directly enter the lungs and affect it severely.

The earlier lead was one of the major air pollutants. It causes an interruption in the development and maturation of RBCs (Red Blood Cells). Generation of this pollutant was possible by vehicular emission. Lead-containing petrol or leaded petrol was one of the major sources of air-borne lead emission in India. However, it was a thing of the past because unleaded petrol is used nowadays. Hence, India has gradually overcome this major air pollutant.

A particulate pollutant is very dangerous to human health, plants, and to the entire climate. Children and elderly people are prone to diseases caused by particulate pollution. However, normal persons can also experience temporary problems.

Exposure to particulate pollution can cause irritation of eyes, throat, and nose. It can also cause tightness in chest, difficulty in breathing and decrease in lung function.

PM vary in shape and size. Fine particulates can enter easily and penetrate deep into the respiratory systems of human and can affect the lungs. It attacks the bronchi and can cause lung cancer.

Reports suggest that particulate pollutants can cause asthma with the increase in the fine pollutant globally. Rising rate of diagnoses links asthma to particulate matter pollution.

Fine particles can easily enter the body without facing resistance from the body. Therefore fine particles have a drastic impact on the heart and the functions of the heart. Therefore, particulate matter is responsible for many cardiovascular diseases. Frequent exposure to PM can lead to a large amount of inhalation of particles. Therefore, accumulation of PM will cause the buildup of plaque in the arteries and vascular inflammation.

Air pollutant inhalation can cause plaque buildup. This will lead to hardening of arteries and in turn cause heart problems.

Particles ability to enter into the body makes it easy to enter any pregnant mothers body and then into the child during long exposure to particulate air pollutants. Thus, the harmful chemical pollutants can cause any type of birth defects. It is also the reason failed pregnancies specifically in town and cities facing extreme levels of pollution.

High levels of aerosols and other pollutants can cause premature death. Air pollution due to coal industries is the cause of many premature deaths every year in India and globally.

Effect on Vegetation and Plants

Particulate pollutants have the ability to block stomatal openings. Therefore, it can retard the photosynthesis process. Hence, air pollutants can damage the plant, reduce crop and vegetation yield, and increase their mortality rate.

The rise of particulate pollution is disturbing the environmental balance. Therefore, it is predicted that it can be the precursor of many climatic disasters such as volcanic eruptions. Reports suggest particulates matter can negatively impact weather on a regional level. PM decreases the levels of evaporation of water in the Indian Ocean. It is linked to the lack of Indian monsoon or reduction of the Indian monsoon.

Nowadays droughts occur more often on a global scale than it used to. Aerosol haze and particulate pollution have the ability to push tropical rainfall and are the reason for a number of droughts human’s experiences on a global level. PM causes the decrease in rainfall. It is also responsible for the increase in greenhouse gases and global warming.

Question: Inorganic or organic fine particles suspended in air refers to as