We know a structure of an atom consists of electrons, protons, and neutrons. This was accurately presented after several scientists came up with different models. The classic model of an atom was given by Ernest Rutherford called the Rutherford atomic model or Rutherford model of the atom. However, it is not considered the accurate representation of an atom anymore. Let us know more about this model.

Rutherford proposed that an atom is composed of empty space mostly with electrons orbiting in a set, predictable paths around fixed, positively charged nucleus. 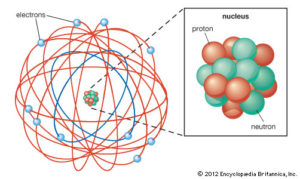 The concept of atom dates back to 400 BCE when Greek philosopher Democritus first conceived the idea. However, it was not until 1803 John Dalton proposed again the idea of the atom. But at that point of time, atoms were considered indivisible. This idea of an atom as indivisible particles continued until the year 1897 when British Physicist J.J. Thomson discovered negatively charged particles which were later named electrons.

He proposed a model on the basis of that where he explained electrons were embedded uniformly in a positively charged matrix. The model was named plum pudding model. However, J.J. Thomson’s plum pudding model had some limitations. It failed to explain certain experimental results related to the atomic structure of elements.

In Rutherford’s experiment, he bombarded high energy streams of α-particles on a thin gold foil of 100 nm thickness. The streams of α-particles were directed from a radioactive source. He conducted the experiment to study the deflection produced in the trajectory of α-particles after interaction with the thin sheet of gold. To study the deflection, he placed a screen made up of zinc sulfide around the gold foil. The observations made by Rutherford contradicted the plum pudding model given by J.J. Thomson.

On the basis of the observations made during the experiment, Rutherford concluded that

What is the difference between the Thomsons and Rutherford Atomic model?

Postulates of Rutherford atomic model based on observations and conclusions

Learn more about Thomsons Model of an Atom, by J.J. Thomsons, which was the first model of Atom.

Rutherford’s experiment was unable to explain certain things. They are:

Even though the early atomic models were inaccurate and could not explain the structure of atom and experimental results properly. But it formed the basis of the quantum mechanics and helped the future development of quantum mechanics.

Question: Name the part of an atom discovered by Rutherford α-particles scattering experiment

Answer: The answer is 4. Rutherford α-particles scattering experiment led to the discovery of nucleus.