Understanding the formation and functioning of a p-n Junction is paramount to analyzing the working of semiconductor devices. Let’s look at how a p-n Junction is formed and how it behaves under a bias (or an externally applied voltage).

Formation of a p-n Junction

Let’s imagine a thin p-type silicon (p-Si) semiconductor wafer. Now, we add a pentavalent impurity to it. Due to this, a small part of the p-Si wafer is converted into an n-Si. Now, the wafer contains a p-region and an n-region with a metallurgical junction between the two. Two important processes take place during the formation of a p-n Junction:

This diffusion leaves an ionized donor (or a positive charge) on the n-side. This donor is bonded to the surrounding atoms and is immobile. As more and more electrons start diffusing to the p-side, a layer of positive charge (or positive space-charge region) in the n-side of the junction is formed.

Since the diffusion of electrons and holes across the junction depletes the region of its free charges, these space charge regions together are called the depletion region. 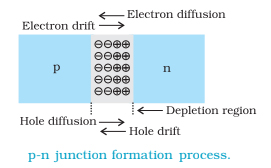 This process is depicted in the image above. The thickness of the depletion region is merely around one-tenth of a micrometre. Also, an electric field develops, directed from the p-side to the n-side of the junction. This is because of the positive space-charge region on the n-side and the negative space-charge region on the p-side of the junction.

The Last Stages of Formation of a p-n Junction

Question: Why is a photodiode is used in reverse bias?

Question: The curve represents the I−V characteristics of which optoelectronic device? 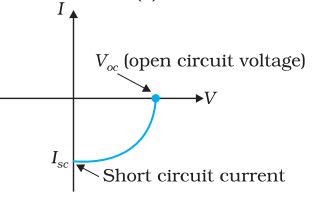 Question: From the adjacent circuit, the output voltage is