Introduction to a Junction Transistor

A junction transistor has three doped regions – emitter, base, and collector. These regions form two p-n junctions between them. Depending on the number of n and p-type semiconductors in the transistor, they are of two types: 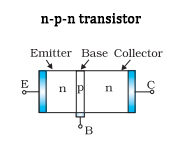 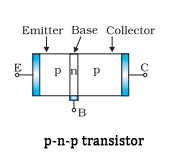 As can be seen in both the figures above, all three segments have different thickness and doping levels. The schematic symbols of both these transistors are as follows:

The arrowhead shows the direction of the conventional current in the transistor. Let’s understand the three segments in detail:

It is also important to note here that junction transistor was invented to produce an enlarged copy of a signal – an amplifier. Eventually, it became equally popular as a switch.

The Amplifying Capabilities of a Junction Transistor

A junction transistor works as an amplifier when,

The circuit diagram for the same is as shown below:

As can be seen above, the base is the common terminal for two power supplies whose other terminals are connected to the emitter and collector.

Hence, these holes appear as minority carriers at the junction. Hence, they can easily enter the collector (which is a p-type semiconductor). The holes in the base can either:

Since the base is very thin, most of the holes find themselves near the base-collector junction (reverse biased). Hence, they cross over to the collector rather than move to the base terminal.

The forward bias leads to a large current entering the emitter-base junction. However, most of it diverts to the adjacent base-collector junction. Hence, the current coming out of the base is a small fraction of that entering the junction. The total current in a forward biased diode is Ih + Ie … where Ih is the hole current and Ie is the electron current.

The emitter current IE = Ih + Ie. However, the base current IB << Ih + Ie. This is because a big part of IE goes to the collector instead of the base terminal. Now, current enters the emitter from outside. Applying Kirchhoff’s law:

where IC is the current emerging from the collector terminal. Also, IC is nearly equal to IE since IB is very small.

In an n-p-n transistor, current enters from the base to the emitter. The description of the paths followed by the majority and minority charge carriers is similar to that of the p-n-p transistor. However, the current paths are exactly the opposite.

In an n-p-n transistor, electrons are the majority charge carriers, supplied by the n-type emitter region. They cross the thin p-type base region and are able to reach the collector to give the collector current, IC.

Question: Name and describe the three regions of a junction transistor