Solids can be classified as metals, semiconductors or insulators based on conductivity or resistivity and energy bands in electronics. This helps us understand the band theory and the importance of valence and conduction bands in solids. Let us also study the types of semiconductor.

Classification Based on Conductivity

It is important to note that these values are indicative and could go outside the range as well. Let’s shift our focus to semiconductors. These can be of the following types:

Classification Based on Energy Bands

Classification of Metals, Semiconductors, and Insulators

Let’s understand this better with the following diagrams and explanations: Ec and Ev are the same as case 1 and Eg is the energy gap. This diagram describes a solid where the conduction and valence bands overlap each other. Hence, electrons can easily move from the valence to the conduction band. This makes a large number of electrons available for conduction. Also, the resistivity of such solids is low or the conductivity is high. 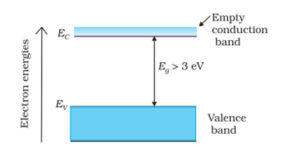 This diagram describes a solid where the energy gap (Eg) is very large (>3 eV). Due to this large gap, electrons cannot be excited to move from the valence to the conduction band by thermal excitation. Hence, there are no free electrons in the conduction band and no conductivity. These are insulators. Question: Name the different types of semiconductors with examples.

Solution: Semiconductors are of the following types:

Question: What are valence and conduction bands?